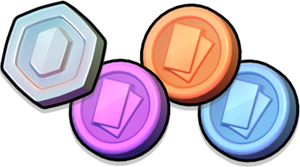 Trade Tokens allow players to trade cards with other players in their Clan or with the Trader. They can be obtained from Challenges, as a Trophy Road reward, and by purchasing them from special offers in the Shop. There are four different types of Trade Tokens; one corresponding to each rarity of card in the game. Players can hold up to ten of each token. A player must be King Level 8 or higher in order to trade; if they are not, they can still obtain Trade Tokens, but they will not be able to use them until the level requirement has been met.