This page is about Challenge events. For the main mode events, see Events. 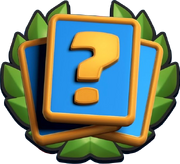 Special Event Challenges can be classified with a number of parameters. Theoretically, these parameters can be played at any combination.

By number of players:

By wins and losses:

Community content is available under CC-BY-SA unless otherwise noted.
Advertisement