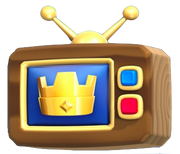 “TV Royale contains some of the best games played recently. Watch and learn!”

TV Royale is unlocked at the Goblin Stadium (Arena 1). It showcases highlighted battles between two players in the game. TV Royale is a place for players to see replays of close battles.

Retrieved from "https://clashroyale.fandom.com/wiki/TV_Royale?oldid=364648"
Community content is available under CC-BY-SA unless otherwise noted.