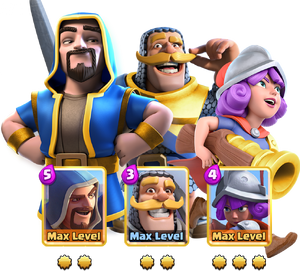 “Use Star Points to unlock cosmetics
for your cards!”

Star Points are used to unlock cosmetic changes for Cards. Star Points can be spent to upgrade level 7, 10, and 13 cards and give them Star Levels, but the player must have a level 6 King Tower. Cards with one Star Level glow bright gold while being deployed. Cards with more Star Levels have golden particle effects and golden clothing, armour, weapons, or other elements added to their sprites in battle. Star Levels do not have any effects on interactions; they are purely cosmetic. All cards currently have at least one-Star Level, with some having two or three.