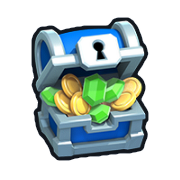 The Shop is unlocked at Goblin Stadium (Arena 1). It offers Cards, Chests, Gems, Gold, and occasionally Special Offers. In the Shop, these can be purchased for Gold, Gems, or real money, providing an easy and accessible way to obtain these commodities.

Retrieved from "https://clashroyale.fandom.com/wiki/Shop?oldid=367913"
Community content is available under CC-BY-SA unless otherwise noted.