6 October 2017
“The Master Builder has sent his first contraption to the Arena! It's a fast and fun flying machine, but fragile!”

The Flying Machine card is unlocked from the Builder's Workshop (Arena 6). It is a single-target, flying, ranged troop with low hitpoints and moderate damage output. It appears to be a small turret in a barrel with a rotor on top. The Flying Machine costs 4 Elixir to deploy. 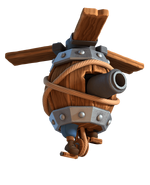