“Express yourself during battle with Emotes!” 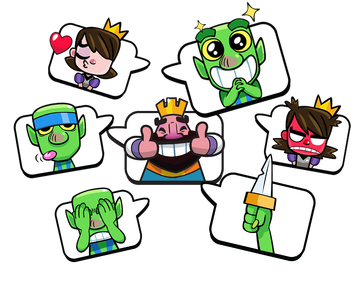 Emotes are a form of expression which primarily allows players to communicate during a battle. Emotes play an animation accompanied by a sound effect. Emotes can be sent while participating in a battle, when spectating a battle, or in the chat of a Clan by tapping the corresponding button.

There are two main types of Emotes: regular and Exclusive. The only visual difference between regular Emotes and Exclusive Emotes is that Exclusive Emotes have a Legendary border around them. From a technical standpoint, Exclusive Emotes are only available for a limited amount of time, and can never be obtained once the time period has passed. There are certain regular Emotes which are partially exclusive upon their release; they lack a Legendary border, but will not appear in the Shop's Emotes section for purchase until a certain time period has passed.

There is a "third" Emote type which can only be accessed when the player is participating in battle, and they appear as text bubbles. These Emotes only contain the basic pop-in animation and no sound effect, but instead of showing an animation, they display a line of text. There are currently only 6 text bubbles, all available by default. In English, they are (from top to bottom, left to right) "Good luck!", "Well played!", "Wow!", "Thanks!", "Good game!", and "Oops".

Outside of battle, the player can see their Emote collection by tapping the “Cards” section at the bottom of the main menu, then tapping the tab labeled with 3 speech bubbles at the top of the screen, next to the “Battle Deck” section. Here, they can create an "Emote Deck" of 8 Emotes, which will appear immediately upon tapping the ellipsis speech bubble in battle. Below the Emote Deck is the player's entire Emote collection, along with a list of non-Exclusive Emotes that have yet to be collected.

When the player is spectating a battle, they can access their Emote collection by tapping the ellipsis speech bubble at the bottom right corner of the screen. The function is nearly identical, except text bubbles cannot be sent and their Emotes will appear on the side of the battle, although smaller and without sound.

When the player is in a Clan's chat, they can access their Emote collection by tapping the smiley face button next to the text button. Their Emote Deck and text bubbles do not appear. Instead, all of their Emotes will appear in pages of 20 in chronological order, with the oldest Emotes appearing at the top and left the newer Emotes appearing closer to the bottom and right. Tapping an Emote will send it to the chat. Clan members will hear the sound and see the animation of the Emote if they are in the chat when it is sent, and all members can replay the Emote by tapping on it.

From the start of the game, the player has access to 4 default King Emotes and the 6 text bubbles. They can obtain additional Emotes through various means:

“E” indicates that the Emote is Exclusive and will never appear in the Shop's "Emotes" section for purchase.

“---” indicates that the Emote has been announced or appeared in some trailer, but is not yet obtainable in-game.

(Note: The numbers corresponding to each Emote here may not necessarily line up with the order in which they are displayed in-game. They are numbered for convenience, such as when referring to them in other areas of the wiki.)