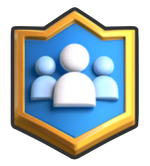 “Clans are an integral part of the game. Join one to get in on the fun!”

Clans are a feature where players can congregate and try to push themselves to their best potential while receiving and giving help from friends and competing with other Clans, to prove their skill in Clash Royale. Clanmates can donate cards to each other and work together to fight Clan Wars. Once the player has completed the tutorial, they are allowed to join or create a Clan. However, the player must be at least King Level 3 to request cards. The player can initiate Friendly Battles in a Clan. One will not get any rewards from them, nor will they lose or gain trophies. In a Clan, players are able to share replays from both their own battle log and TV Royale. Clans can have up to 50 members.