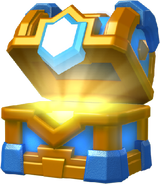 The Clan Chest rewarded Clans for gathering as many crowns as possible during a three-day period. As the Clan earned more crowns, higher tiers of the Clan Chest would be unlocked which would award more Gold and Cards.

Retrieved from "https://clashroyale.fandom.com/wiki/Clan_Chest?oldid=351785"
Community content is available under CC-BY-SA unless otherwise noted.