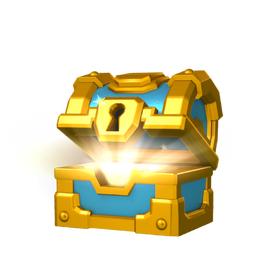 You can earn Chests to obtain Gold, Gems, Cards, and Wild Cards. There are multiple ways to obtain chests, including buying them using Gems, unlocking them as a prize from a Challenge or Tournament, or winning them in battles. Chests won from battle require to be unlocked with a Chest Key, or by waiting a certain amount of time. Unlocking a chest takes a certain amount of time. Alternatively, the wait can be skipped using Gems or a Chest Key or hastened using boosters upon reaching a new Arena or League. Each player respectively has four chest slots, so one can only have up to four chests waiting at a time. It is still possible to battle when your chest slots are full, but no chests will be won until a box has been opened. Chests always contain cards from the Arena the player earned them in and below and/or cards the player has already unlocked, except for Legendary Chests, which can contain a Legendary Card from any Arena. Unlocking a new Arena adds new Cards to the Chest rewards — none are taken out. If you have the Pass Royale, you can queue a Chest which means as you unlock a Chest you can set on another to start unlocking soon after the current Chest finishes unlocking. The Chest rewards are determined the moment the Chest is opened, which means that a player can save a Chest to be unlocked at a higher Arena for unlocking a new card from it or for a higher level, for the possibility to unlock Champions.

The rarer a card is, the less likely it is that a given chest will award an extra card of that rarity.

This table uses weeks starting on Monday. If a Season has five weeks, no tiers are unlocked in the fifth week.

*These Chests require time to open only when opened from a chest slot. When gained in any other way, they can be opened instantly. The Gem costs to instantly open these chests are determined by the duration left.

**"General means" means that they can be bought in the Shop as offer, either alone or in packs, and sometimes are given for free, however, better Chests have lower chances to be given for free. They can also appear in one-time offers in Special Event Challenges and Global Tournaments.

*As of the June 2021 update, Chests from Goblin Stadium (Arena 1) will not contain any Epics, unless the player has unlocked at least one Epic Card in any other means (for example, having played the Tutorial before the said update).