This page is about what cards exactly are in general. To read more about the individual cards in Clash Royale, click here. 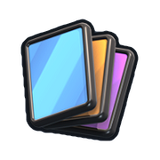 Cards are the only method of deploying troops, spells, and buildings onto the battlefield. Deploying cards costs Elixir, which is gradually gained during battle. Cards are primarily obtained through buying them with Gold or Gems in the Shop, or through finding them in Chests. Cards can also be received through trading or through clan members fulfilling requests. Duplicate cards obtained will fill up an upgrade meter. Once the meter is full, you can upgrade the card with Gold. All health and damage statistics are increased by roughly 10% per level. Cards that are able to spawn troops, such as the Goblin Hut and Graveyard, will have their spawned troop level increased by 1 per level.

Champion cards share functions which are unique to their rarity.

Each troop and defensive building in Clash Royale has a range, specified in tiles.

Click a column header to sort a table. Note: the levels of the cards in the tables below are currently those of the Tournament Standard Rules (11).

Please note that some cards have been omitted from these tables due to their unique abilities that would make it difficult to compare them to other cards.

^ The Total count of cards includes the Unlock cards as they can be used to upgrade a card to the next level. You can even donate or trade away the only non-Legendary or Champion card to unlock it and still be able to use the card at the lowest level.