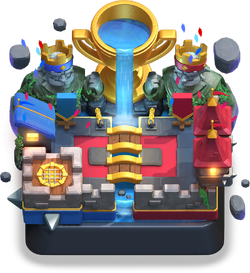 “Arenas are the battlefields where players compete.”

Arenas are unique battlegrounds that are unlocked as the player's Trophy count increases. Each Arena, besides the Legendary Arena, will unlock new rewards, like Chests, and players with a higher Arena level will contain more Gold and Cards. Once a player advances to a higher Arena, they cannot be demoted to a lower Arena. The Legendary Arena changes style every season such as the Golden Dragon Spa in May of 2021 or Royal Tomb in November of 2020.